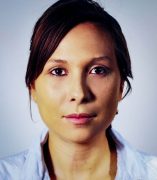 Michele Ferris-Dobles is a PhD international student from Costa Rica, Central America. She has been a Fulbright scholarship recipient twice for pursuing her MA and PhD studies in the United States. Her recent research has focused on the use and roles of new communication technologies for building digital networks of solidarity and support between Central American migrant communities. She is interested on understanding the implications of new media on interpersonal communication, identities, and political organization of immigrant and displaced communities. Her research interests include gender studies, latin and latinx studies, philosophy of technology, critical theory, network analysis, film studies, and cultural studies. Michele earned her BA in Communication and Audiovisual production at the University of Costa Rica, completed her MA in Documentary Film at Wake Forest University in North Carolina, and has worked as a filmmaker, professor, and facilitator of participatory media projects in Central America and the United States.