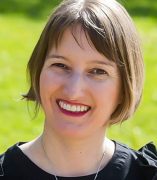 Tanja Aitamurto, PhD, is an Assistant Professor in the Department of Communication at the University of Illinois at Chicago. Tanja examines, designs, and deploys new media technologies for informing, empowering, and connecting people. She studies the impact of new media technologies on people's behavior and society, often in the contexts of digital journalism and democratic processes.

Her focus of inquiry is on the two following questions:

1. How do new media technologies impact human behavior and society?

2. How can we harness these technologies for social good, to foster a more diverse and inclusive society through journalism, media and digital democracy?

Tanja operationalizes these questions in empirical contexts including large-scale online collaboration systems, such as applications of collective intelligence in open and participatory journalism, public deliberation and policy-making, and civic crowdfunding. She also examines virtual, mixed, and augmented reality as civic technologies. Tanja’s work is driven by both academic goals and a mission to contribute to a more equal, informed, and inclusive society. Tanja’s work has received several awards and has been published in highly- ranked academic venues such as the New Media &amp; Society, Human Factors in Computing Systems (CHI) and Computer-Supported Collaborative Work and Social Computing (CSCW). She has attended meetings and given talks about her research at the White House, the United Nations, OECD, the Council of Europe and in several Parliaments and Governments. Prior to joining UIC, Tanja worked at Stanford, UC Berkeley and Oxford. In her projects, Tanja often collaborates on in-the-wild experiments with media organizations and local and national governments. Prior to returning to academia, Tanja worked as a journalist specializing in military and defense, reporting in countries such as Afghanistan, Angola, and Uganda. In her free time, you can find Tanja hiking, skiing, exploring the amazing art museums in Chicago, and enjoying the outstanding jazz bands at Green Mill.