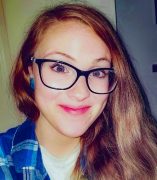 Lauren Levine is a second year Ph.D. student. Before attending UIC, she received a B.A. in Environmental Studies in 2013 from Austin College in Sherman, Texas, and an M.A. in Journalism in 2015 from the University of North Texas in Denton, Texas. Her M.A. thesis titled, “Act like punk, sing like a feminist: A longitudinal content analysis of feminist themes in punk rock song lyrics, 1970-2009” received a Top Paper award at the 2015 AEJMC Midwinter conference in Norman, Oklahoma. Her research interests include popular culture and public discourse, gender and mass media, counterculture, and humor and comedy theory. Outside of UIC, Lauren is an active sketch comedy writer and performer, having her work featured in several notable festivals, including Chicago Sketch Fest, Dallas Comedy Festival, and more. In addition, she was the 2018 recipient of the Jason R. Chin Improv Scholarship, studying comedy performance at iO Chicago. Upon completion of this doctoral program, Lauren hopes to continue writing, researching, and balancing her comedic and academic life.

M.A. in Journalism in 2015, University of North Texas in Denton, Texas.