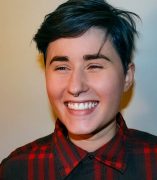 Loren Ezra Whitman is a first year PhD student in Communication at UIC. Their research primarily focuses on political media, social movements, and the intersections of race, class, and gender in Leftist activist struggles. Mx. Whitman attends UIC to continue their ethnographic work on intersectional coalition building among activist groups, unions, and non-profits in fights to end the deportations at the Gary-Chicago Airport. They received their bachelors in cultural anthropology at Indiana University Northwest and their masters in communication from Purdue University Northwest. Loren Ezra was awarded the Eugene V. Debs 'Communication for the Common Good' Award by the Purdue University Northwest and the United Steelworkers’ Local 1010 for their dedication to social justice and activist research. Whitman is currently working on a project analyzing self-representations of transgender people on Instagram as an activist strategy and another project analyzing the information flows among immigration activist networks in the Midwest.